Happy anniversary Belfast Comics. The first post to this blog was set up by Paddy Brown on 3rd July 2009. Get us ones some cake.

First up, The Black Panel and Avalon Arts. From Wednesday Feb 27th, Irish independent comics and strip-zines will begin making their way into displays at the Haymarket Arcade craft shop. First up are Tales From The Void, My First Festival and Downpour, and Belfast comixers in among the pages of Don't Panic!, Romantic Mayhem and Lightning Strike. The permanent display is part of a local authors section and I'll be carrying Belfast Writer's The Ghost In The Glass and Other Stories horror anthology, the poetry of Jim 'Cosmic Nomad' McClean and Southerner Peter Loftus' Survival In A Void. Over 60 titles will be carried on weekly rotation with more on the way. If you're an Ulster author and would like your work stocked, mail drew.luke at gmail, or call in on a Wednesday. [MAP] 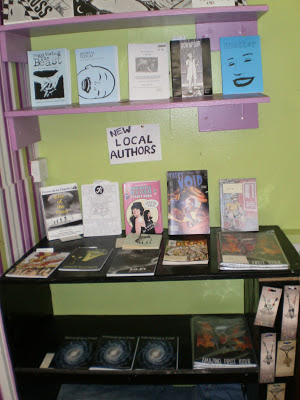 Next up, Will Simpson at the W5 for two months.

"This exhibition showcases some of William's incredible concept artwork for film and television. His original pencil drawings will be on display in our level 5 gallery and the exhibition gives visitors of all ages and backgrounds a truly unique opportunity to see these wonderful images up close."
Read more about it at the W5 website.

Banbridge-based radio show Following The Nerd are an occasional favourite. When presenting content, they've a good track on interviews with international TV and film crews as well as local creative types. The show transmits on a Wednesday night between 9-11pm, with the recording usually going up the week after. Last week they talked to Paul J Holden, and that interview should be in their bountiful archives shortly.

If you can't wait, 'Peej' has a column "on getting the best from the iPad drawing app Procreate" at Infinity, the free digital comics magazine sponsored by Panel Nine. You can download Infinity through here.

Stephen Downey writes about how he is taking part in Creator Owned Day, which is this Friday 1st March. And on Malachy Coney's blog there are some photos of the recent Noe The Savage Boy signing. Paddy Brown grows closer to Page 200 of his epic The Cattle Raid of Cooley in the usual place, and Andy Luke or me releases three issues of digital comic Kick! for sale at 25p each.

Dual identities are commonly exercised by the Northern Irish, so expect a flurry of activity around March, which has been designated Irish comics month. The next Belfast Comics Pub Meet takes place on Thursday 7th at The Cloth Ear from 9pm onwards. You're welcome.