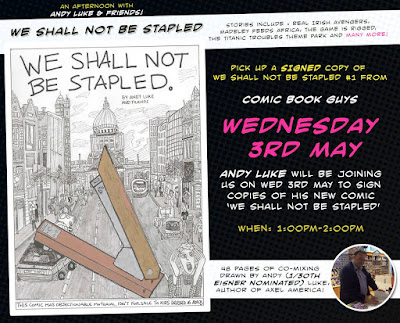 We Shall Not Be Stapled hits the lunchtime launch slot at Comic Book Guys, in The Spires Shopping Centre, Wednesday May 3rd, 1-2pm. Almost all drawn by myself it features stories by Richard Barr, John Robbins, Mark McCann, Danny Pongo, Laura Reich, Dan Lester and Ben Stone.

So, pick up a print copy from the Guys or at the Enniskillen Comic Fest this weekend. A digital edition is forthcoming, priced £1.50 approx. Contact drew (dot) luke at gmail for more details.

Also, Belfast resident, the legendary Glenn Fabry is running a Kickstarter for his new sketchbook. The amount has been raised, but with 5 days to go, it might be worth getting in on the ground floor for some special offers.

[Updated]  Andrew's Comic, is the story by and about Andrew Fitzsimmons as he deals with terminal cancer. It's been co-produced by Danny McLaughlin of Uproar Comics. There's an aim to get 3,000 copies to hospitals across the province. Andrew's Comic will be launched at the Black Box on June 25th. From the 26th, the comic will be in exhibition open to the public there, with pages printed in large gallery format.

Donations are welcome. You can find out more by visiting http://andrewscomic.co.uk/
[Source: Belfast Telegraph]

To coincide with the release of GunSuits, Belfast's PJ Holden and John McCrea, of upcoming Hitman spin-off, Section Eight, will be signing copies at the Big Bang, Dublin on Wednesday 10th June at 6pm. The pair are following that with a signing at Belfast's Comic Book Guys, in The Spires on Thursday June 11th, at 5pm. 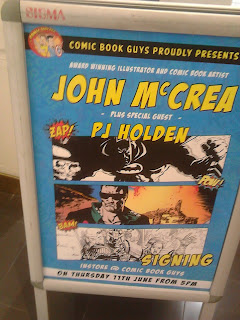 Paddy Brown has returned to work on The Cattle Raid of Cooley. Check out the final leg of this epic at http://paddy-brown.co.uk, every Wednesday.

To End All Wars: A Graphic Anthology of World War 1 features a strip I've written, along by 30 or so others. The soft-cover is coming out this Summer, but the bug news is, it's already been nominated for two Eisners, in Best Anthology and Best Reality Based Work. 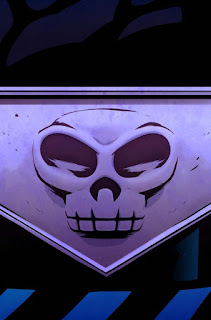 Here's another look at it, courtesy of PJ Holden's Twitter feed. 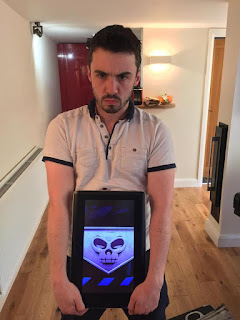 And of course, Stephen's drawing for Flash Gordon too. 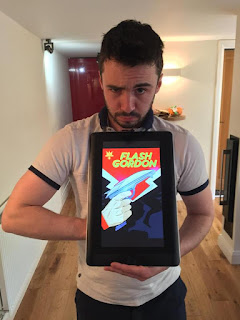 Photos from a Creator's meet at Stephen's studio. I took this one, 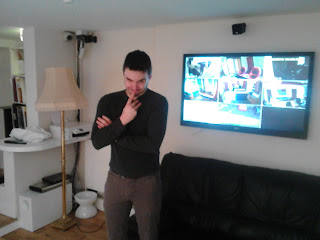 Way over in Enniskillen, Paul Trimble hosts a weekly meet on Saturday mornings, upstairs in the town's Wetherspoons.

And in Belfast, there's a monthly 2000AD meet up, in the lobby of the Europa at 1pm on the last Saturday of the month.
Posted by Andy Luke at 09:16 No comments:

Belfast - Cult Fiction, the debut art show by aspiring graphic novelist Helen Gomez at the Banjo & Bakery, 353 Ormeau Road. Event is from 7pm.
Helen counts among her influences computer games, saturday cartoons, Spiegelman, Gaiman, McCloud and Gilliam. She says of the exhibit, "Each canvas is a self-contained story with the narrative power of a panel" [ Facebook link here]

Banbridge - THE Will Simpson gives a public interview about his work as THE Game of Thrones storyboard artist. Cost is £7.50, though students get in for £2.50 and Friends of the F.E.McWilliams Gallery are asked for a £5. The event is at the Old Town Hall, 1 Scarva Street, beginning 7:30pm sharp.
[More details at Creative Change NI.]

And if you're stuck at home Following The Nerd broadcasts Thursday from 9pm, talking blockbuster comics culture, and maybe some comics too. [Followingthenerd.com]

Also the less-contentious home of our friends at the 2dcast.[link]

Bangor Community Radio talks to Andy Luke, Stephen Downey and Paddy Brown about their comics, and gets Will Simpson's opinion on late night arts.

Belfast has a new comic book store in Unit 4, The Spires, Fisherwick Place.
Today is late openings, photos show a clean relaxing area and here's a link to their facebook page.
The website for the shop is http://comicbookguys.co.uk

PJ Holden is taking part in Cross - a political satire anthology on Kickstarter which looks rather good. Runs until Saturday 8 November.

This Wednesday lunchtime (1pm) a free event at the Linenhall Library as John Killen presents a talk on sature and political cartooning in Ulster. More details on this page.

On Sunday, Farset Labs are hosting 24-Hour Comics Day: Personal Narratives in Belfast this weekend coming. I can't think of a better venue.

Thats Saturday October 4th-October 5th 11am-11am. You can register for a free ticket at Eventbrite and access the Faceybook page here.

Bangor Community Radio 107.9 FM are broadcasting a 24 Hour Comics Show, this Thursday October 2nd from 6pm to 7. Host Ellie Rose McKee and myself will be talking to Paddy Brown and Stephen Downey about  the 24 Hour experiment and their work in comics in general.

During enquiries, we managed to uncover news Stephen has a strip in the Flash Gordon Holiday Special 2014, alongside creators from The Daily Show and the hit podcast, The Flop House. Stephen confirmed the news on Sunday, following the announcement he's also drawing Turok: Dinosaur Hunter with local comixer Ruairi Coleman, for Dynamite. Arts Hour can be heard live on the internet and the show will be published on Ellie's Soundcloud the following Monday.
Posted by Andy Luke at 18:00 No comments: