Ex-Belfast HUNT webcomsic illustrater, Matthew H Smyth, has for over a year dodged requests for completion on his comics commission from myself, Andrew Luke. The commission came from an award given to me by Belfast City Council and Workwest's business entreprenuers fund. A loophole in the program meant Smyth did not need to provide evidence of signing any contract. A willed program of neglect and avoidance coupled with Smyth's capitalising on social currency from his relationship with me brings me to the decision: his work should be boycotted until such a time as he agrees to return the money. Here Endeth Matthew Smyth.

Belfast comics poetry artist Dale Mawhinney was one of those considered for the job. Dale writes that he's taking commissions for painted work. You can see Dale's beautiful gear at http://www.dalemawhinneyart.co.uk/

Miguel Martin is becoming a bit of a Vine funster supreme lately. Last month, he opened his tweet-stream up to drawing requests. For your viewing pleasure, here is some Maggie Thatcher shotgun and some Jeremy Kyle bowel incapacity
And yes, actually: he's been painting Lavery's Bar too.

Stephen Maurice Graham brings us his version of Spiderman : it's a keeper, @400facts. 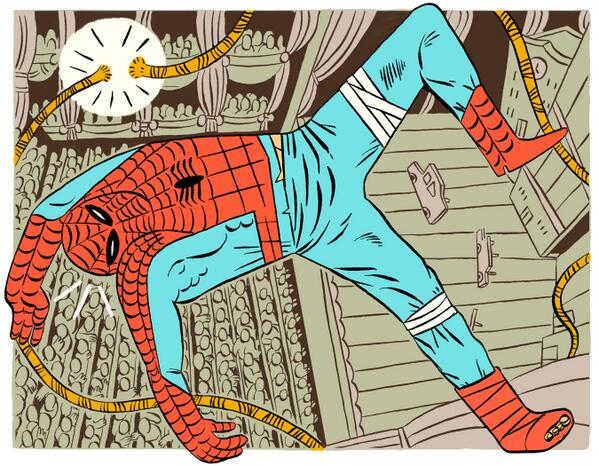 PJ is Holden a sketch club at the W5 on Sunday 29 March from 2-4pm with models costumed fantasy characters. As far as I know it's free.

A reminder too, that while the Belfast Comics Group no longer meets on the first Thursday of the month, Seedhead Arts' Real Sketchys do. The event is fairly unstructured, a bit of fun and held in the warm environment of The Black Box, just after 9.

Issue 1 of Jennifer Wilde is now available from Comixology at only 69p. It's the first of Atomic Diner's range, presumably others will follow.

The Comics Journal reviews Cu Chulainn in a comparison of Paddy Brown's Cattle Raid of Cooley and MK Reed's About A Bull.

There's a bit of praise from Britcomics impressario Pat Mills on "Bottomley - Brand of Britain", In his introduction, the work by myself, Ruairi Coleman and John Robbins is "valuable" with 'excellent research'. The book "To End All Wars" is up for pre-order on Amazon.

It's due out in July, just ahead of the Belfast Comic Con.

Finally, an Exclusive!
Rumour mill has it that Fermanagh College (Enniskillen) are organising a convention focussing on "Games Development/ tv and films/Effects and Comics" happening on 9th-10th May. We're waiting for the college to put out an official notification. More definite is that a weekly group meet around these interests happens in The Townhall Street Wetherspoons most Saturdays from 11:30am to 2pm-ish.
Posted by Andy Luke at 10:50