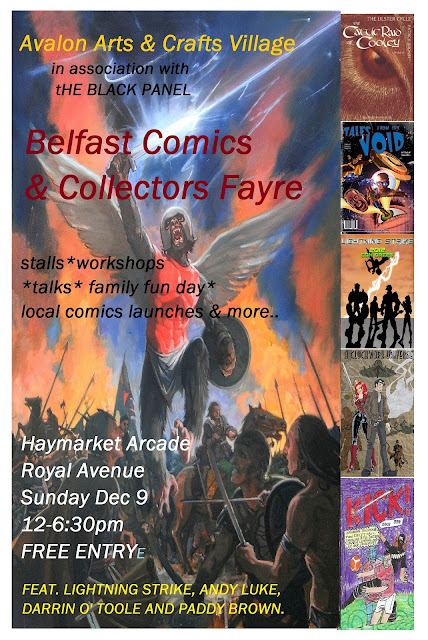 "The “family fun day” event is run by Avalon Arts, a collective organising workshops, alternative and craft fairs and music performances. The site is a good one: Haymarket Arcade is located at the bottom of the central Royal Avenue, about five minutes walk from City Hall. The recently converted arcade has some resonance for comics readers. It was once the route taken through to the original site of The Talisman
(now FPI Belfast), one of Northern Ireland’s first comics shops, as well as Impulse Comics in the late nineties." - from Downthetubes.net

The Belfast Comics & Collectors Fayre is this Sunday December 9th in the Haymarket Arcade, Royal Avenue from 12-6pm.

Billed as a fun, free, family day with exhibitions of comics art, workshops, panels, talks, face painting, fancy dress and a bar. Confirmed guests at this time include:

and from the South of Ireland,

The Stack and The (relaunched) Black Panel will both be selling, delivering British, Irish and American comics and probably more than that.

The Magnificent One Day Comic Book Factory is happening, and there will be new comics premièring in the form of Paddy Brown's Cattle Raid of Cooley #7, and Andy Luke's Kick!

Very detailed coverage of the event is available on this text document.